With raises over the few years to 2014 holding steady at 3% both locally and nationally, the results of the 2014-2015 ERC Wage & Salary Adjustment Survey came as no surprise - both the actual & projected overall average adjustments in 2014's survey remained at 2.9%. Figure 1 below provides an overview of actual and projected increases in Northeast Ohio since 2004, and more specifically, illustrates this post-recession consistency from 2012-2014 (not to mention the 2.9% increase projected for 2015 in 2014’s survey). 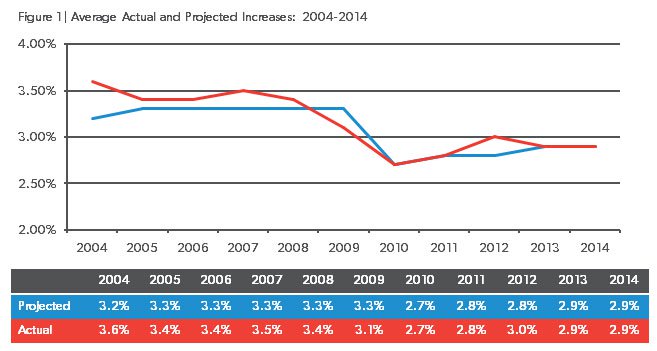 Raises are the Norm

Of the 145 participating organizations that reported data in 2014, only 4% of the total sample indicated that they did not provide raises in 2014 and an equal percentage indicated they also would not be providing raises in 2015. As shown in Figure 2, these figures are right on target with 2013's predictions and have not only fully recovered from the recession, but have actually surpassed pre-recession levels. Ultimately, it seems that although employers are not providing larger increases in terms of percentages, at the very least some pay increase has once again become almost universally expected. 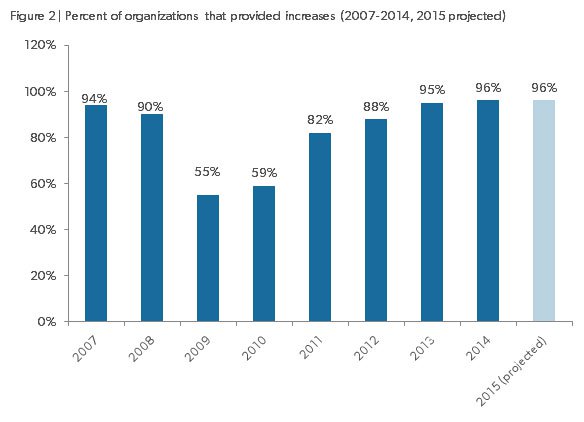 Who’s Paying What & Why?

Additional analysis of the 2014-2015 survey reveals that about 60% of participants are projecting an adjustment of 3% or greater for 2015. This percentage is even higher depending on the employee category, with Executives and Supervisory, Managerial, & Professional employees slated to receive the highest raises.

It is also important to note that a continued emphasis on variable pay is beyond the scope of the Wage & Salary Adjustment Survey. The increasing popularity of the "pay for performance" philosophy, gives employers an opportunity to reward certain employees above and beyond this 3% threshold in order to reward and encourage high performers.

Northeast Ohio businesses are not alone in their consistent 3% pay adjustments. A 2014 SHRM article confirmed that studies by both WorldatWork and Hay Group had almost exactly the same findings. In fact, when these national studies broke out increases by major metropolitan area, Cleveland's actual and projected percentage both came in at exactly 2.9%.

Other major cities with 2.9% increases included Atlanta, Boston, Minneapolis, and Philadelphia. When compared to other Midwestern cities, Cleveland is just slightly outpacing Cincinnati, Detroit, Pittsburgh, and St. Louis, which all fell somewhere between 2.7% and 2.8%. Ultimately, although Cleveland is not keeping up with the largest metropolitan areas, such as Chicago, New York, and Los Angeles, Cleveland is actually slightly more competitive at the regional level.